Written and Directed by Michael Devine 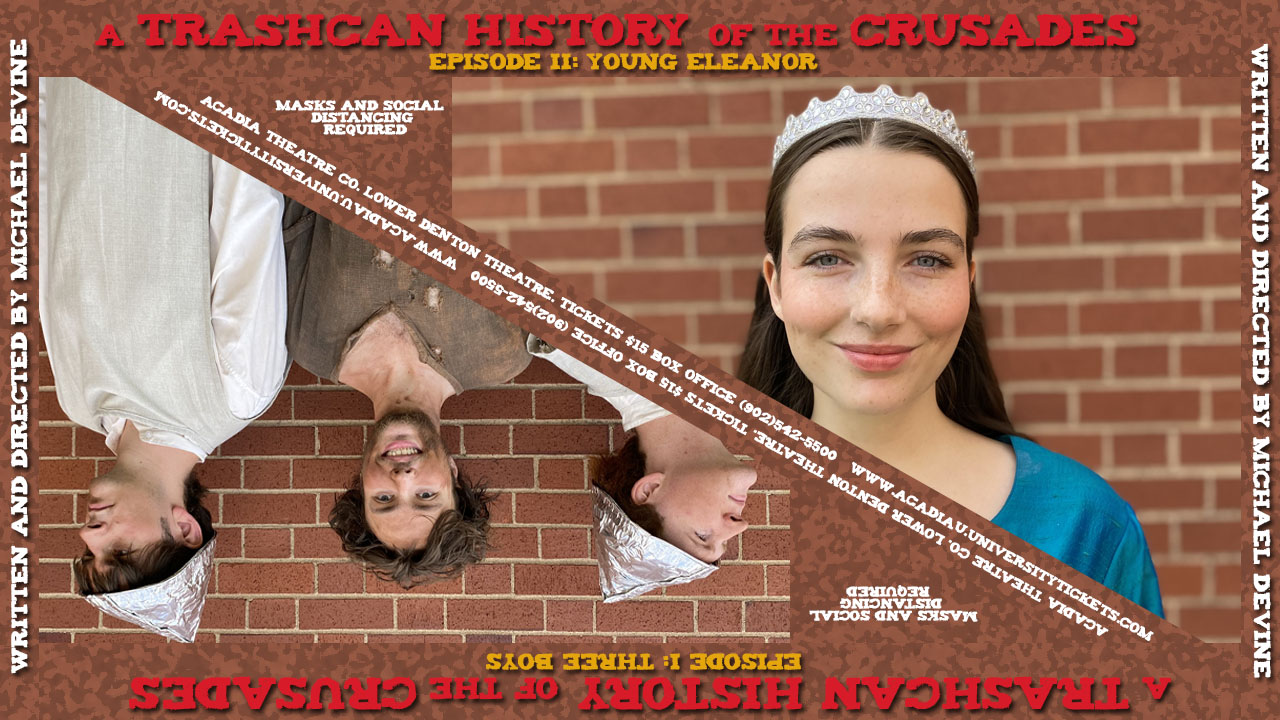 A Trashcan History of the Crusades, Episode I: Three Boys

Three Boys uses music, sketch comedy, a fantasy world peopled (mostly) by adolescents, and the events of the First Crusade to explore themes which are pressing and relevant to our society. It’s the late 11th century, and Alex, the Byzantine Emperor, needs some help dealing with an invasion of unwanted Muslims into what he considers his neighbourhood, Asia Minor. The scruffy, crude boys of the Frank neighbourhood agree to go along for their own reasons: to crack some heads and get eternal absolution on a quest to save the Holy Lands for Christians. Pete, Bobo and Godfrey navigate the politics and gruesome aspects of an ethnic war as they cross the Byzantine lands and arrive in Palestine to a reality very different than the knightly saga they envisioned. Three narrators who enter and exit the action maintain the audience’s critical distance while creating the factual landscape for the Crusades period. Thought-provoking and wildly funny, Three Boys explores themes of lost innocence, the consequences of ignorance, and the use of Othering for political ends.

A Trashcan History of the Crusades, Episode II: Young Eleanor

Women typically don’t feature in militarist or patriarchal histories. Yet Eleanor (the Eagle) Aquitaine was, over the course of a long and remarkably combative life, a force that few men could ignore. Popes and Kings tried to navigate the telling of history without her. They failed. This play is an exploration of what happens when a force of nature confronts entrenched orthodoxy head-on, repeatedly. Experience the galvanic excitement of seeing what happens when rock meets hard place. Young Eleanor Is a a play about people who got a lot done by telling stories. In the Middle Ages, the time of the first troubadours, stories were a kind of currency, passing the time, creating links, and achieving goals. Stories are shared experiences, but they also separate the teller and the told. This is a play about a remarkable woman. As such it’s also about isolation: voluntary, ritual, forced, inevitable. We tell our stories to understand, or to be understood. Sometimes we even succeed.

Anton Chekhov’s Uncle Vanya was first presented by the Moscow Art Theatre in 1899 and directed by Konstantin Stanislavsky. The story unfolds on a provincial Russian estate, inhabited by characters grappling with love, loss, and carrying on, notwithstanding personal and social upheaval.

This production was originally conceived as live theatre presentation for the Acadia Theatre Company and re-imagined as a Remotely-Directed Digital-Theatre-Film Experiment for the present age. Enjoy!

Want to help out in the theatre?
Contact the ATC Coordinator